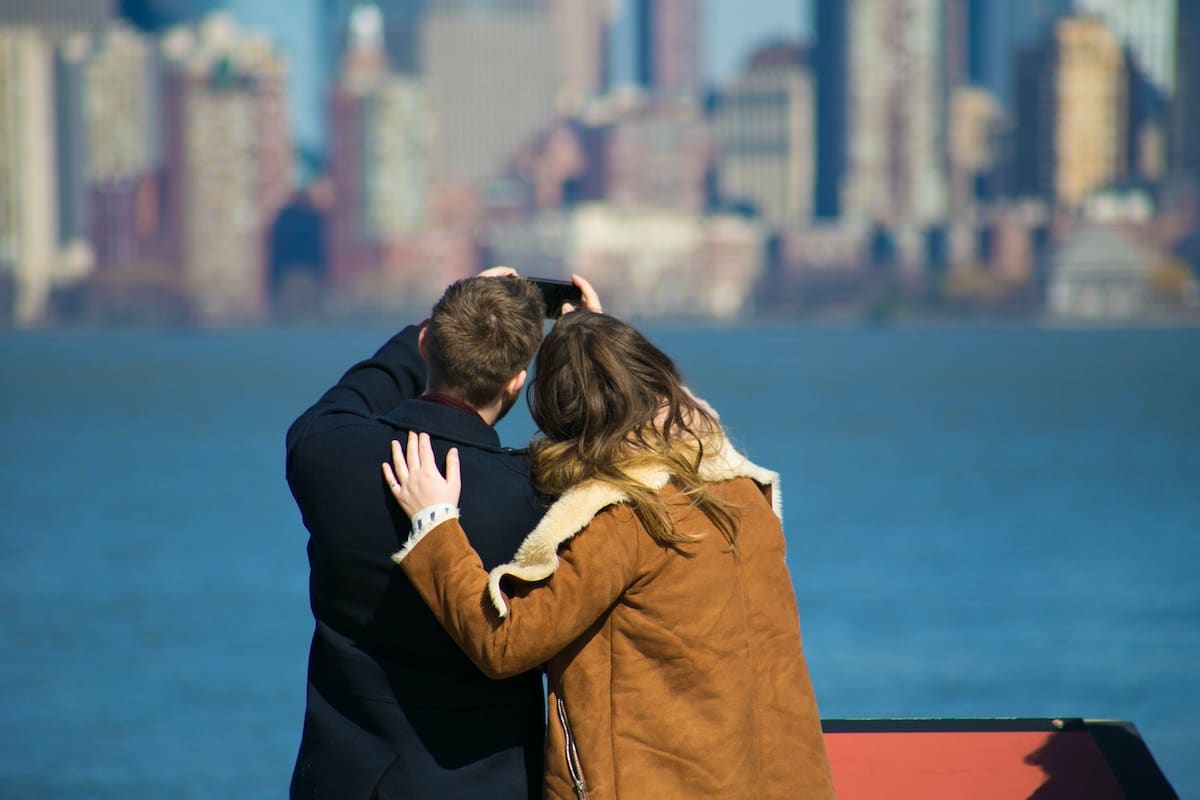 Deciding that you’re going to end your marriage is hard. But what’s even harder is taking the next step. You might decide to divorce, only to be faced with a months-long — or even years-long — legal process. At that point, you may wonder: Should I date while I’m separated? Or to put it more bluntly, when do I get to start living again?

A simple yes or no answer doesn’t quite cut it. There are lots of things to consider, such as:

Below, I’ll outline some ways to think about it that can help you figure out your own situation. We’ll start by taking a look at your type of separation and what it means. Then, we’ll get into the possible risks. I’ll also give you a series of questions to see how ready you are to date before giving my final take on it. After all, you do deserve to move on. The question is, how?

First, What Is Separation?

Let’s start with the basics. As tempting as it is to want to move on, being separated doesn’t mean you’re not married. You simply live apart from your spouse. Your marriage is still legal (even if you documented your separation legally). So what you do during this period of separation could affect your divorce process. That of course, includes dating.

Ascent Law Firm tells us there are three types of separation. Here’s what each of them means and how your decision to date could affect each one.

Let’s say you and your ex-spouse decide to separate. You move out to your own apartment or vice versa. Your separation isn’t documented formally, but you both agree that you can’t live together, at least not right now. You might even still be trying to decide whether or not to get back together. Perhaps you’re just taking a break from the relationship.

If this is your situation, you are still financially tied to your ex. All the same financial rules and responsibilities apply as if you were still a married couple. So dating someone when you’re in a trial separation can be dicey. You may not have even fully ended the marriage emotionally, so starting a relationship with someone new will be very hard to do.

Also, since your finances are not completely your own (you share them jointly with your ex), your ex might even try to claim any money you get from your new girlfriend. It’s not guaranteed obviously, but you leave the door open by not legalizing your separation and then attempting to date.

Permanent separation means you live apart from your spouse without any intention of getting back together — but you’re not divorced either.

Because you have no intention of getting back together, a court may consider the date you separated as when you no longer are tied to each other financially. What you each earn from that date forward, and any debts you incur, now belong to you individually. You don’t have to share any property you buy after that date.

So maybe that new condo you buy and moved your girlfriend into would be safe… but maybe not. Since the date of permanent separation means so much financially, your ex could strongly contest it, and many often do.

If you’re legally separated that means you filed a request in family court. It actually changes your marital status in the eyes of the law. You aren’t married… but you can’t marry anyone else, either. What a legal separation agreement does though, is iron out all the questions about how you’ll divide your property, share custody of your kids, and so forth.

Why get a legal separation? Maybe your religion looks down on divorce. Perhaps you think it would benefit your children in some way. Or maybe you just need to keep your health insurance (yes, that’s definitely a thing — although it doesn’t always work, so be careful).

Lots of people who don’t want to divorce live as legally separated for years. Even indefinitely. Obviously, if you’re legally separated, you’d probably want to date during this time. Just know that, like other types of separation, fewer women would be okay with dating you. The legality of your separation improves things but doesn’t give you the same green light that a divorce would.

What Are the Risks of Dating While Separated?

Dating while you’re separated has its benefits, but you should also be aware of the risks. Let’s take a look at some of them.

Your ex may accuse you of adultery.

Yep. Here’s the thing: If you have a sexual relationship with someone else before you’re officially divorced, it’s actually adultery. That includes if you were legally separated, according to LegalZoom.

So what does it mean when you commit adultery? Possibly, your ex could use it against you in court. If your ex can prove that you’re having an “affair,” then it could affect your marital settlement. It depends on what state you live in, but it could be especially true if you move in with your new partner quickly, like within a few weeks or months. If you’re in an “at-fault” state, adultery could be used to justify why your ex deserves a bigger settlement.

Your current love interest will be used against you in custody decisions.

Dating during separation can really complicate custody battles, say the folks at Altshuler Law. First, your new girlfriend’s character and lifestyle could affect how the judge sees you as a father. If she has any kind of issues with drug abuse, alcoholism, or seems irresponsible or a danger to the kids in any way, that could be used against you when negotiating how much time you get with your children.

Especially if you live with her. Or, even worse — let’s say she helps you out financially. That could affect how much you have to pay in child support, or even alimony, if your ex decides to pursue it.

You’re missing the chance to get back together with your ex.

So far, we’ve been assuming that you don’t ever want to get back together with your ex. But what if you’re not sure? Perhaps this is a trial separation and you’re thinking that while you’re separated, why not just “try” dating too?

The problem is, if you date during a separation when your intentions are still fuzzy, you close the door on a possible reconciliation. Once you actually start seeing someone else, it will be very hard for your ex to see you the same way. She may assume that it’s over. But sometimes we decide to separate from our partner just so we can center ourselves before trying to work things out. Or, we might use separation as a distraction, but still want to be with our partner in the end.

Consider counseling if you think you may eventually want to get back together. That way you can keep your options open.

You’ll undermine your long-term relationship with your ex.

What could have been an amicable divorce can get ugly really quickly. Seeing you move on to a new partner within weeks or months could anger your ex or make her not trust you.

If you’re trying to negotiate alimony and/or custody, her attitude will greatly affect how smoothly things go. Start dating now, and you could activate a side of your ex you don’t want to see — which could hit your wallet pretty hard.

Are You Ready to Date While You’re Separated?

Bottom line, if you want to date while you’re separated, you have to be ready to take that step, because as we’ve discussed, it can affect your divorce.

Here’s where I recommend you should be:

You no longer are seeing your ex in a romantic way.

This means there’s no chance that you guys will end up in bed together. Period.

You initiated the separation (ideally).

It’s easier if you were the one who left because it shows you’ve taken the time to really process the idea of separating. If she was the one who left, then you could still be in reactive mode. You may just want to date out of spite or fear of being alone.

You can talk about your marital status without confusion.

Once you’re back in the dating scene, women will want to know what’s going on with your separation. You can’t stumble on this answer. If you can’t explain why you’re not divorced yet without feeling like you have to hide details, or without hemming and hawing, then you’re not ready.

You’ve taken time for yourself.

Getting a divorce is a huge change in the direction of your life. You need to reflect on who you are, what you want, and how you will make your next relationship different. This takes time. So if you’re hopping on Bumble or Hinge the night you decide to split from your ex, just chill. It’s too soon.

You are able to tell your ex you are dating again.

The biggest sign that you can safely date while you’re separated is when you can tell your ex. You’ll know when this is possible.

By now, you should be able to tell that dating during separation is a complex issue. Certainly, I don’t have a one-size-fits-all answer. You need to decide for yourself what works, given the details of your relationship.

But here’s what I think: Regardless of the type of separation, you should not intend to get back together. I think it’s okay to date during separation only if you meet these three criteria:

If she’s still in love with you, I recommend taking some time before dating someone new. And I certainly wouldn’t throw it in her face on social media by posting pics of you and your new babe. Worst case scenario, if she still loves you and doesn’t want a divorce, then dating could really come back to bite you in court.

Finally, definitely don’t date during your separation if your ex (in her mind, still your wife) doesn’t even know you want a divorce. Again, both parties need to be on the same page. You can’t make her think the two of you have hope when you’re out on the town dating. That’s unethical and selfish.

Should I Date While I’m Separated? Wrap-Up

No matter what’s going on with your separation, I’m sure it’s painful. Wanting to date while you’re separated is natural — after being in a bad marriage, you just want to feel good. And while separation can mean many things, it definitely indicates that some of the old rules of marriage are now bent.

Whatever you decide, just do it carefully. As you can see from this article, there’s a lot to think about. It’s easy not to consider the long-term consequences during such an emotional time. But that doesn’t make them any less real.

The most important thing to do, instead of deciding whether to date, is to really take care of yourself. A therapist, a coach — or ideally both — can help you make sense of what’s going on inside you as well as navigate your new life.

Having the support of a professional as well as others like yourself can make things much easier. That’s why I offer private one-on-one coaching as well as a group coaching program for men to provide the help you need. Book an intro call with me today to find out more.