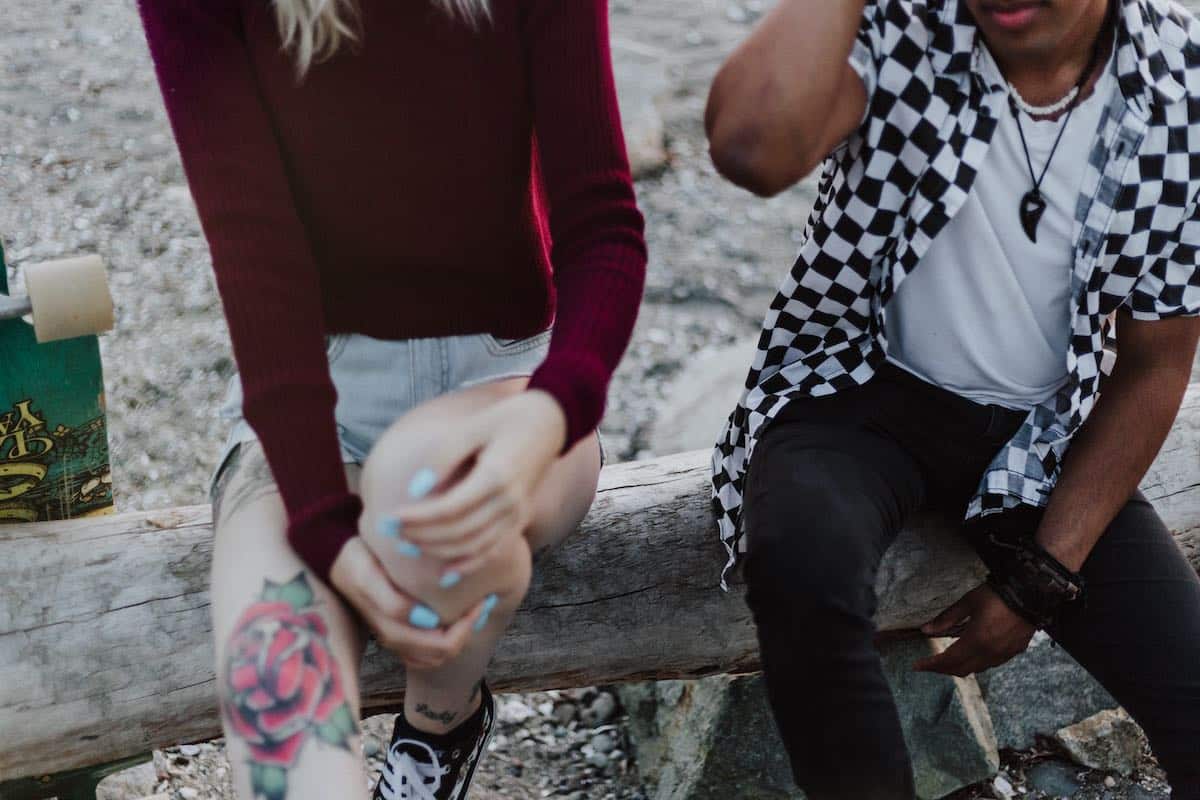 Invite him out for a beer.

Talk about your feelings.

Realize that neither of you will give in.

Then fight to the death!

Fine, fine, while this is probably the plot of a South Korean horror film, it won’t really work out IRL.

It sucks that you’re not going toe to toe with another dude, but in reality, this was happening all along.

Just because you have the hots for someone, are dating them, or are even married to them, feelings and labels don’t prevent someone from having feelings for more than one person. Your romantic relationship can change at any time regardless of how close you are to the woman in question.

That being said, the fear that she might ditch you is stronger than ever. She likes you, but she likes another guy too.

The thought of losing her can make you do some pretty stupid things.

Reminding yourself that “she likes me and another guy” every day can cause you to hit her up on a daily basis and smother her with well-meaning affection.

This may sound like a good plan, but it’ll backfire.

Instead, let’s build an alternative plan, one that will actually work.

She Likes Me and Another Guy, What Should I Do?

You’re in a bit of a quagmire.

Look even if you play this perfectly right, you still might not wind up in your ideal situation.

But here’s the reality. You don’t like your current situation. You can either do nothing and hope that the universe looks upon you with pity and convinces her to dump the other dude she’s been seeing, or you can make your own luck.

Lay it all on the line.

I mean maybe don’t tell her that you fantasize about her every waking moment or that you made her a 1,000 song playlist especially for her.

What you should do is tell her how you feel.

She doesn’t know what she wants, fine. But her indecisiveness doesn’t have to impact yours. To better help her make a decision tell her where your head — or heart — is at.

Tell her that you want to date her exclusively, you want her to be your girlfriend, or that you’re fine for an open relationship. Whatever the case may be, spell it out for her.

Showing that you’re unequivocally into her will help her make a decision. Not only is it super hot for a dude to straight-up tell a woman that he’s got the feels for her, but your input will put some questions she had to bed.

Perhaps she was thinking about ditching you because she thought you weren’t that into her. Never assume that she has a lucid understanding of your feelings. Clearly explaining your position can only serve to provide her with clarity and help her make a decision.

Understand Where Her Head’s At

So if you’re scratching your head thinking to yourself “She likes me and another guy” you might want to go through the following exercise.

How did you learn that?

Surely you two must have had a conversation of some sort. Learning that she’s dating someone else isn’t a trivial topic that you just gloss over. What else did you two talk about?

If this initial conversation didn’t spill too many beans, artfully bring it up again.

She’ll know that it’s bugging you if you broach the topic out of nowhere. Organically work it into the conversation. Ask her if she’s free this Friday, then joke saying, “that is, if the other man hasn’t asked you out already.” Joking around indicates that you’re handling this like an adult and that you’re mature enough to have a conversation about this “other man.”

Once you’ve set the scene and have ensured her that you won’t throw a public tantrum, ask her where her head’s at. Perhaps she’ll outright tell you that she’s dating multiple guys and isn’t interested in settling down just yet. If you’re MegaDating you can’t be mad at her because you’re doing the same exact thing.

Perhaps she’s not into monogamous relationships or is only dating around because she’s thinking of leaving the city soon — something you would not have known had you not asked.

Whatever the case may be, there’s no need in freaking out until you understand the specifics.

Take A Step Back

After learning where her head’s at you can create a tailor-made response when you let her know where your head’s at. You can address her points in detail because you’ve thought about them in-depth. After this emotionally draining conversation has been had you can do one of two things.

You can continue to obsess over her or you can step back.

It’s this latter option that will win you the brownie points.

After you’ve told her how you feel, back off a bit. Give yourself a few weeks or a month until you reach out to her. Consider telling her this so she doesn’t feel like you suddenly don’t care for her anymore — that might kinda lead things to backfire.

Stepping back gives her the time she needs to sort things out. But more importantly, it makes you look like a G. This mic drop move will have her missing you hardcore. Look just because she’s dating multiple dudes doesn’t mean she’s not super into you. She no doubt wants to spend time with you. Not having you in her life for a period of time will show her how much she misses you when you’re not there.

It also raises your perceived value.

By showing restraint it indicates that you have a life of your own. You don’t need her to be happy. Feel free to post some pics on SM to demonstrate how awesome your life is regardless of her presence. It may sound callow, but she’ll see these posts and think to herself, “damn, Jeff’s life is awesome, I want some of that awesomeness too.”

Just log into IG right now and scroll through literally any random person’s IG. Soon enough you’ll be hella jealous of Tuesday bowling… and you don’t even like bowling. That’s just what IG does to people.

Hanging back and playing it cool doesn’t just mean finishing the last season of the Marvelous Mrs. Maisel and daydreaming about working out.

It means filling up your social calendar. It means enjoying your life. Honestly, what is also means… is dating.

But wait, how could you date when you just told her you were gonna step back?

MegaDating is simply the act of dating prolifically. It’s a great strategy for when you’re struggling with the fact that “she likes me and another guy.”

I urge all my aspiring romantics to date around. Dating various women provides you with the emotional armor you need to get rejected and get back up again. It’s difficult to be down when you’ve got dates lined up on Wednesday and Saturday with two awesome different women.

Dating prolifically also will open your eyes up to what you really want in a woman. If you only date one woman, if she leaves you, you’ll feel like your soulmate — and only woman in the world that wanted to date you — is gone.

MD will show you exactly what kind of woman you want and that you’re able to not only find her but woo her. So many dudes find themselves stuck in lame relationships because they think they can’t do any better. Dating various women proves yourself wrong.

Let me show you how it’s done.

The 1s and 2s of Dating Like A Boss

The only way you’ll go on various dates this month is if you put in the work to make it happen.

That means using the MD strategy for mining dates. It involves downloading 5 dating apps, meeting women at parties, your gym, talking it up at PTA meetings, hitting Meetups, being set up through friends, etc.

Once I walk you through the exact science of mining for dates you’ll never be without a date on Friday night again.

If you don’t have ample time to mine for dates, no worries. Let me know and we’ll play the role of matchmaker for you. Unlike other matchmakers, we don’t use a limited dating pool to set our clients up with. Instead, we use a team of love e-recruiters to comb through eligible women in your city in order to find single women worth your time.

After you have a lineup of women to go out with, it’s time to begin dating.

But considering you have at least a date a week for the foreseeable future you don’t want to burn a hole through your wallet or tire yourself out too early on. In our MegaDating blueprint, we encourage all first dates to last no more than one hour. No more than an hour and no more than $10 should be spent on a first date. This ensures that you won’t go broke nor will you feel too tired going on multiple dates a week.

The truncated first date also means that if you don’t like the person walking by your side as you take in the scenes of the Presidio you only need to spend an hour with them before you can bail. First dates are nothing more than opportunities to meet up with complete strangers to see if there’s any chemistry. If there’s no juice, quit squeezing and move on to the next one.

Look, let’s say she comes back to you after taking some time away from here and says the following.

“Hey, thanks for giving me time to think about things but I still want to date around, I hope that’s cool and that we can still see each other.”

Perhaps you know that you two don’t have an identical vision of your shared future. Maybe knowing that your visions don’t align you can’t bring yourself to date her in the same way you did before. Doing so would be like trying to scoop water out of a boat that has a hole in it; inevitably it’s going to sink.

Maybe she’ll never be your girlfriend, but that doesn’t mean you have to cut ties. If you have the mental fortitude that only MegaDating will give you, you can ask her to become a friend with benefits. Explain to her that you can’t keep seeing her as is or else you’re afraid you may fall for her. That being said, the sex was great, and you feel like you have the ability to not mix emotional feelings with sex. Tell her you’ll give her a little while to think about it but that you’d still love to see her again, just not in the same capacity of old.

She Likes Me And Another Guy

She likes you. But the affection of one woman whose affection is split between multiple men is rarely how a relationship begins. I’m here to help.

When we team up together you’ll learn that you don’t need to wait around for one woman to make up her mind. There are a ton of women waiting in the ranks.

Book a 1-on-1 new client Zoom session today and I’ll show you how to find them, ask them out, and woo them.