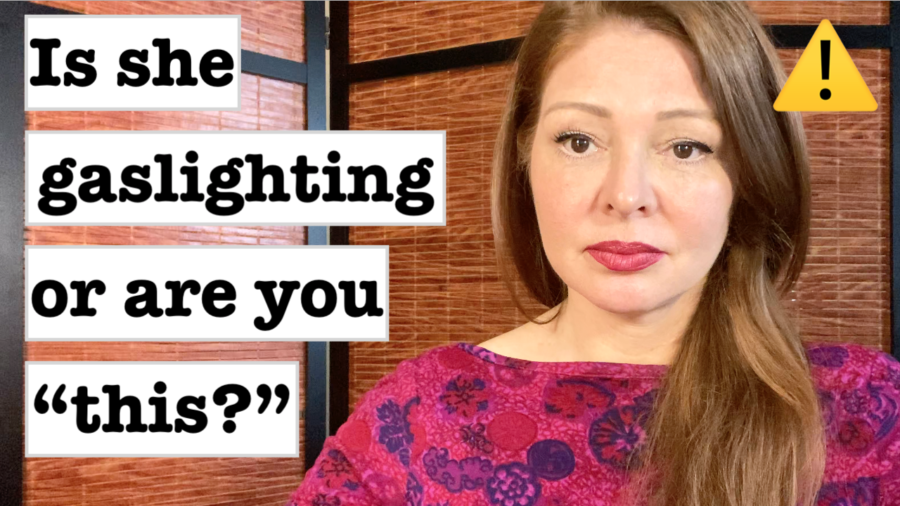 Gaslighting is basically when someone mind *bleeps* you into questioning your sanity and reality by manipulating, misleading, or straight out lying.

By the way, these apply equally to men gaslighting women, so pay attention to if you display any of these unhealthy and abusive behaviours.

If you do any of these things, I highly recommend you watch my Nice Guy playlist (at the end of this post).

Nice Guy Syndrome is when a guy isn’t actually nice at all but instead has a hidden, selfish agenda to get what he wants from others in manipulative ways.

Don’t be that guy.

Now, if you’ve been with (or are with) a gal who is driving you crazy in a not-good way pay attention to your feelings.

Your feelings may be signs she’s manipulating you or signs you have self-esteem issues you need to work out.

Between your feelings and her actions, you’ll have a good idea if she’s a bad idea.

Signs She’s Gaslighting Based on Your Feelings

If you have three or more, you likely have low self-esteem regardless if she’s gaslighting you.

The question is: Are your self-worth issues because of your stinking thinking developed from perceptions about past traumas?

Are your issues because she’s an overt or covert narcissist gaslighting you?

The truth about whether these feelings are caused by you or her is somewhere in the middle, my friend.

The fact is, if your self-esteem was rock solid, you wouldn’t put up with this kind of mental and emotional abuse.

We teach people how to treat us.

The Progression of Gaslighting

The longer it takes to make a change, the less likely you’ll be to get the desired result you want.

In other words, if you’ve allowed her to get into the habit and pattern of mistreating you and now you want to switch tracks, well, that’s like trying to stop a train.

So, the sooner you nip it in the bud, the better for both of you.

If you don’t, there’s about a 95% chance you can’t and the only options are accepting the situation or breaking up and dealing with those consequences.

Ok, but now let’s see if she really is gaslighting you or if you’re a needy simp who has some seriously repressed emotional stuff to work on STAT.

Signs She’s Gaslighting Based on Her Words / Actions

You’re chatting up a girl in a coffee shop and discover she loves pizza and casually mentions you should go sometime. (Meaning: go together.)

She say’s she’s free Thursday evening, but later when you text her to get together she says something like:

“I’m sure I told you I’m not available until Friday. That work?”

You remind her she’s the one who suggested it and she gets pissy and says,

“No, I said YOU should go. And besides, a girl can change her mind, anyways—not that I did!”

You don’t know what to make of this and wonder if she’s crazy or stringing you along.

The flag is getting redder, my friend.

But then she suggests going to Cactus Club because they have great salads.

So you jump on it because at least she wants to get together.

Now you’re dating and want to start introducing her to your friends so you invite her to a friend’s BBQ event.

She says, “Sure” and you give her the event details of time and place.

But when you remind her of the BBQ the day before she says, “You know I don’t like crowds, bae.”

When you question her she says, “I must’ve been on my phone or something, I’d never have agreed to that.”

You react (any reaction even appearing dumbfounded or confused).

She gives a dramatic sigh and says, “Fine, if it’s that important to you then I’ll go, but you owe me.”

Maybe throwing in, “They don’t really like you, anyway. They just know you bring booze.”

You tell her everyone brings booze and she just shrugs it off unbelievingly or says, “Believe whatever you want if it makes you feel better” dismissively.

Example 3 – She be Fibbing

If you’ve been dating awhile, her gaslighting might escalate to outright lies.

“I told you I was going out with the girls on Friday.” She did no such thing.

“Why do you hate my friends? They like you. You’re so mean to me.” She’s projecting her own feelings.

“You said you’d buy me that purse for my birthday, but this is nice, too.” Um, no, you said if she got the raise, she should treat herself.

“Why do you always put me last on your list of priorities?” When she’s clearly first.

Hint: Be careful of using or hearing words like “always” and “never.” Pink flag.

“I asked you to fix the bookshelf why are you wasting time on the recycling?”

Um, no, she clearly said the recycling was irritating her the most.

You sigh in exasperation.

She says, “Don’t be so dramatic. I told you this a few days ago. That bookshelf is going to the Goodwill, anyway.”

She walks away saying over her shoulder, “Don’t be so sensitive.”

“You’re trying to make me feel bad. Congratulations, it worked.”

If she senses she’s gone too far and you’re going to leave her she’ll turn on the charm and make you believe you’re the mean one and lucky to be with her.

You toss the toolkit in the corner, grab your keys and stomp out without saying a word, mad as hell.

She calls after you, “Where are you going…?”

But you just slam the door and go full MIA for hours not reading or replying to texts or phone calls.

When you return, she’s made dinner and is wearing your favourite sexy lingerie.

She doesn’t apologize—or maybe she does—and tries to play off like nothing happened.

She may try to seduce you by whispering in your ear, “Let’s make up.” Wink wink nudge nudge.

Or ever so coquettishly, “You know I get a little crazy a few days before my period.”

So you either give in or you confront her and the cycle repeats itself.

p.s. To avoid Crazyville, click here to get my WakeUP2Luv program and do the steps in it!